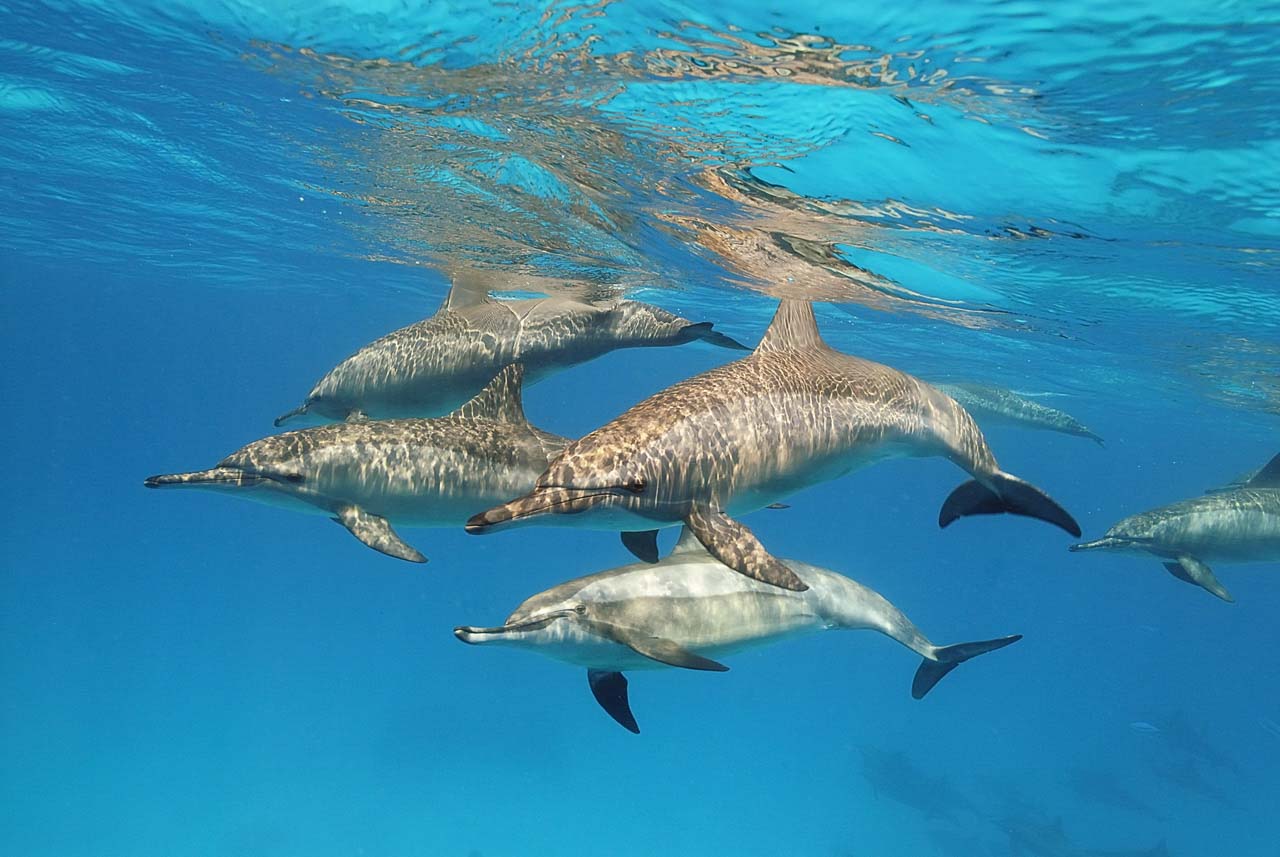 The underwater world is completely fascinating. It is both beautiful and magical. Although very few people have the chance to practice scuba diving, I have had this opportunity and then to become underwater professional photographer.

It is possible to approach the underwater world in several ways in photography. The first is the ambient photography that shows wonderful colorful and infinite landscapes drowned in a deep blue. The second is to show the submarine inhabitants in close-ups: crustaceans, fish, nudibranchs ... The third is to show the large marine animals in the form of wide scenes. This is the solution I have chosen for this collection of art photographs.

Large underwater animals include sea turtles, sharks, manatees, whales. They are often found very close to the surface because the food is more abundant. For example, sea turtles feast on corals, sponges or algae. Whale sharks, manta rays or whales feed on plankton. To photograph these large marine animals, one has merely to descend a few meters under water. The show is intense.

I was fortunate to observe and photograph shoals of whale sharks in the Bay of Tadjourah in Djibouti. In the Red Sea, I often played with dolphins. I was lucky to get close to large sea turtles that ignored me as they grazed seagrass beds on sandy bottoms. My most beautiful memories are certainly in the Indian Ocean when the great manta rays performed graceful ballets with such elegance and majesty.

To me, the large underwater animals represent the quiet strength. For example, whale sharks (or whales) seem to move smoothly and quietly. It is by trying to follow them that I realize that the speeds are incredibly fast for animals of such size.

For me also, the large marine animals also represent a form of elegance and beauty whether in speed for dolphins or ballets for manta rays. It is possible to observe large animals for an hour without ever tiring. But diving times are limited because of the human physiology that does not tolerate breathing air beneath the water for long periods. Underwater shows always have ends that arrive too quickly. It is for this reason that I created this collection because I wanted to witness my wonder at such wonders of nature.

I have had the chance to dive into many seas of the globe. I wanted to share my pleasure and my love for these great marine animals that are often hunted unnecessarily. Some, like many species of sea turtles or sharks, are endangered.

The great marine animals correspond perfectly to my artistic approach because I can unleash my imagination freely, thus giving an artistic and contemplative interpretation of the underwater world.

In this collection, I did not want to show a bestiary or draw up an exhaustive list of species of large marine animals. I simply wanted to show their elegance and natural beauty through visual evidence.

461
School of Dolphins I
How To Order.
Finish Choices.
Display Available Sizes.
Click Here to Receive Information About This Fine Art Print.

244
Dolphin I
How To Order.
Finish Choices.
Display Available Sizes.
Click Here to Receive Information About This Fine Art Print.

367
Manatee I
How To Order.
Finish Choices.
Display Available Sizes.
Click Here to Receive Information About This Fine Art Print.

417
Oceanic shark and his escort
How To Order.
Finish Choices.
Display Available Sizes.
Click Here to Receive Information About This Fine Art Print.

460
Sail Fish II
How To Order.
Finish Choices.
Display Available Sizes.
Click Here to Receive Information About This Fine Art Print.
This page has been read 3817 times
If this page interested you, would you give it a note? (5 stars is the best one)?
(64 votes)
Written by Amar Guillen
Click Here to Discover My New Collections.

Tagged under
Previous page and next page in this category: « "Portraits of Clown fish" - Collection of Fine Art Photos
back to top