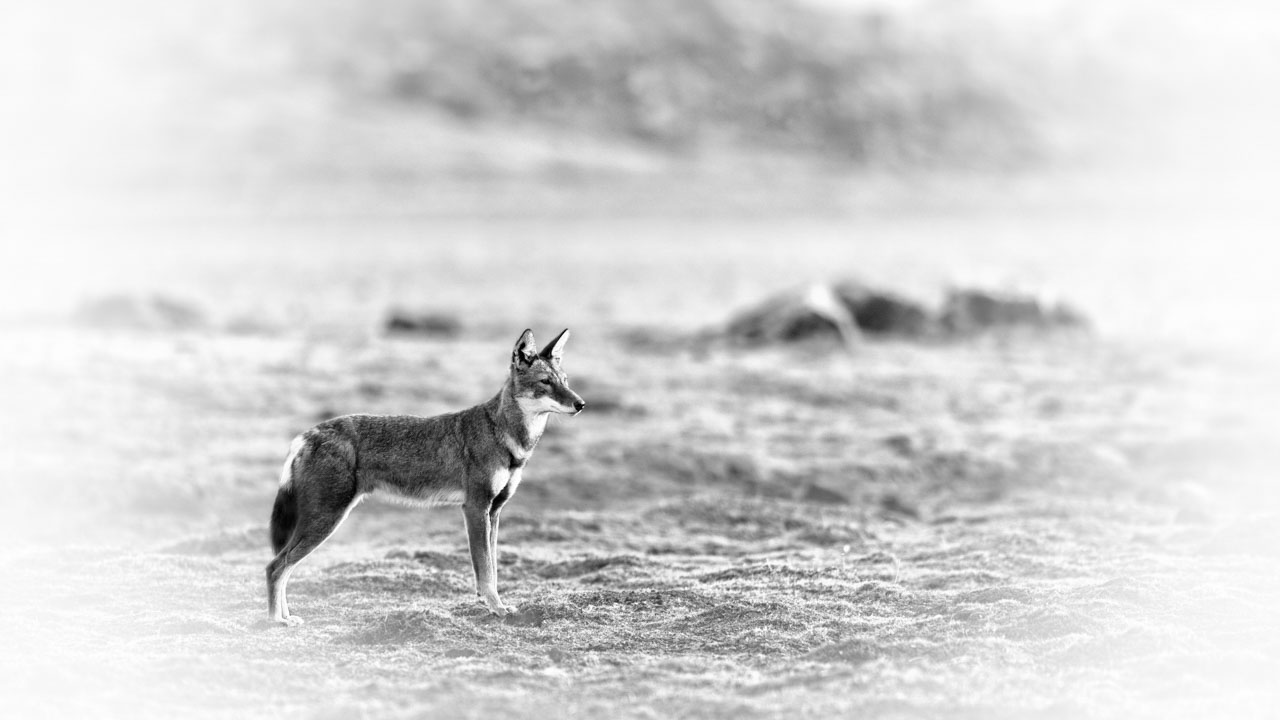 For this collection of fine art prints in my theme « shades of black and white », I wanted to explore the fragility of an endangered animal species that may become extinct soon.

I chose to photograph the Ethiopian wolf, also known as the Abyssinian wolf. This species is native to the highlands of Ethiopia. Today, a mere 500 individuals remain in the wild.

The Ethiopian Wolf cannot live in captivity. It is a free animal that lives at over 3000 meters (9842 feet) above sea level in difficult conditions. The Ethiopian highlands are swept by cold, often violent winds. This creature is mainly found in the Balé region of southern Ethiopia.

I was particularly passionate about the life of this small mammal because it is free. It does not live well in captivity. This species evolves over a vast territory where there are no barriers or constraints. It moves as it wants in search of food or companions.

The first time I ventured onto the Balé plateau, I was surprised by the temperature drop that occurs with nightfall. Vegetation and water are scarce. The landscape is populated with the few trees that can grow in such difficult climatic conditions.

My first encounter with this wild species was with a female. My guide knew a burrow where a female had hidden her 3 cubs. I decided to prepare a blind a hundred meters (328 feet) from this burrow in hopes of capturing some photos. However, I knew that even if I was perfectly hidden, the mother might not be fooled. I was correct in this estimate, as she soon spotted me and avoided returning to the burrow. She made big circles to try to draw me away. During this first trip, I was not able to capture any photos.

On the second trip, I was more fortunate. I managed to take some pictures of young Ethiopian wolves which were part of a pack of ten individuals.

It was during the third trip that luck smiled on me. I was able to observe Ethiopian wolves very closely during a mole rat hunt. A mole rat is a small rodent that lives on the Ethiopian highlands. It is the finest meal of the wolves of Abyssinia. While they were focused on hunting the mole rats, they ignored me, and I didn't have to hide.

Being able to photograph the action of hunting was a real boon for the creation of this collection of black and white art prints. The decor and the light were my precious allies in this process. I was able to take all the photographs which I had dreamed of capturing.

By observing them, I realized that I had not only come to photograph a rare species which is in the process of extinction and which must be protected. I witnessed in front of me an elegant, very agile animal with an expressive gaze. It was an enriching experience.

This pack of Ethiopian wolves tolerated me during this meal. We must not forget that they usually have a bad experience with humans. Indeed, the Ethiopian shepherds do not hesitate to throw stones at them. The Ethiopian highlands have become areas where shepherds venture with their herds of goats. Food is not abundant for most animals, but it is enough for a few herds.

The presence of more and more herds certainly explains the reduction of the natural territories of the wolves of Ethiopia.

I chose black and white with very bright contrasts to accentuate the feeling of freedom that I felt in the presence of the Ethiopian wolves. I hope I have paid tribute to these animals, because living at such an altitude in such difficult conditions deserves true homage. 590
Ethiopian wolf IX
How To Order.
Finish Choices.
Display Available Sizes.
Click Here to Receive Information About This Fine Art Print.
This page has been read 677 times
If this page interested you, would you give it a note? (5 stars is the best one)?
(6 votes)
Written by Amar Guillen
Click Here to Discover My New Collections.