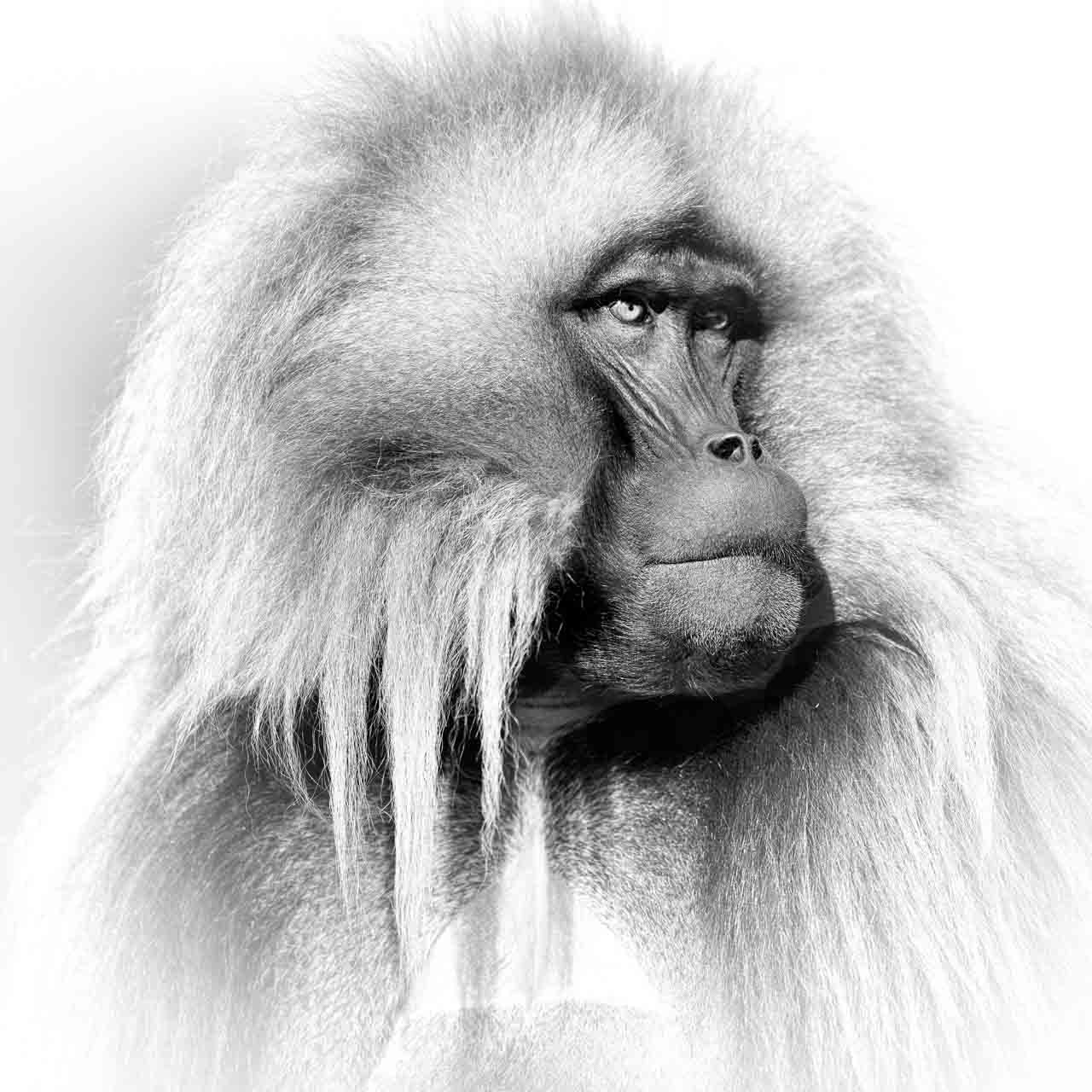 For this collection of fine art prints in my style « shades of blacks and whites« , I wanted to explore anthropomorphism with an animal species.

I chose the extraordinary geladas as the theme. Geladas are primates that are endemic to the region of the Ethiopian highlands.

For the creation of this collection of artistic black and white photographs, I decided to spend several weeks in the Simien mountains during the month of November.

It was my third trip to Ethiopia to photograph geladas. My goal was to photograph monkeys with the Simien mountains in the background to give depth to the scenes. During other trips, my backgrounds were always hindered by trees or rock walls.

Arriving in the mountains, I was fortunate enough to meet large groups of monkeys. I did not expect such a large population.

Unlike the geladas I had encountered during my first two trips to the south, these creatures living in the Simien mountains are easier to approach because they are less hunted by natives. They are less fearful of humans.

Often, I have been able to lie on the grass and wait for groups to come to me. Even though it is an impressive monkey with huge canines, the gelada is quite sociable. When I was surrounded by several animals, I remained still. When they started picking blades of grass for food, I captured shots.

My most beautiful meeting was certainly the one with a young two-day-old gelada who had almost no hair. He was constantly snuggling against his mother's chest. After two days, curiosity won out. He approached me to see what I was doing. I was then able to capture many interesting photos that were completely different than those I had taken previously.

Finally, I was not able to finish my original project of focusing on wide, unhindered backgrounds. The opportunity to capture images with wide views of the mountains never arose. I was so caught up in staying surrounded by monkeys that the days passed very quickly. Thus, the main subject of my project became anthropomorphism that is observed in the geladas.

I could observe and photograph tenderness, sweetness, melancholy, joy, anger, and curiosity. I will never know what these photographed expressions represent emotionally in these monkeys. But I am sure that they must match what we as humans might transmit with our attitudes and bodily expressions.

I chose black and white with overexposure of the highlights (this technique is called high key in photography) in order to clearly reveal the expressions of faces and bodies. The exaggeration of white allows me to accentuate the feeling of freedom that I experienced when I was in contact with them. The geladas do not know borders. They move as they want in search of food. The group advances as if they are one individual.

I wanted to share this collection of black and white art prints of animals with you because I have the greatest respect for this wildlife species. We can learn a lot from these geladas. I hope that my photographic and artistic vision will not leave you feeling indifferent, but that it might spark you interest in this special species. 294
Gelada XXVI
How To Order.
Finish Choices.
Display Available Sizes.
Click Here to Receive Information About This Fine Art Print.
This page has been read 784 times
If this page interested you, would you give it a note? (5 stars is the best one)?
(6 votes)
Written by Amar Guillen
Click Here to Discover My New Collections.