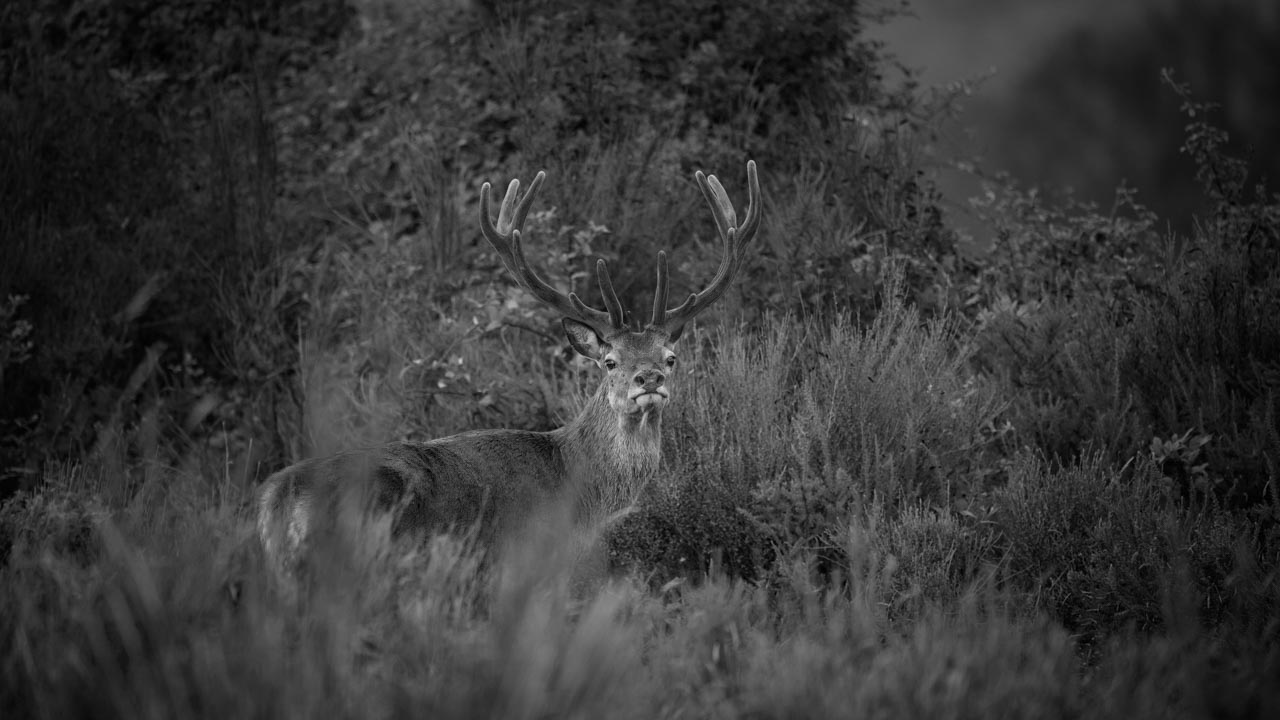 MMy passion for red deer stags drives me to photograph them not only during the rut but also in late spring and early summer.

At this time of year, the deer showcase their velvet antlers.

Between February and May, the red deer stags lose their antlers. Immediately, new growth occurs.

Personally, it is not my favorite time to photograph them because the stag seems unbalanced. Aesthetically, I feel that the photos lack interest. I strive to create my photos in May or June when the spring decor highlights the elegance and the majesty of the lord of the forests and prairies.

Deer antlers are made of bone. They are vascularized organs. During the regrowth of the antlers, they are covered by velvet which provides nourishment and innervation.

The regrowth of the antlers lasts until the end of August, when the antlers reach their full development just before the rutting season.

I have not always been interested in the photography of deer in velvet antlers. For me, the late spring and early summer have been marked as the time to photograph fawns and hinds.

One year, while I was in a ground blind waiting for the passage of a doe and its fawn in the forest of La Coubre in Charente-Maritime, a deer stag weighing nearly 200 kilograms (440 pounds) casually approached me. He did not sense my presence ​​because I was on the right side of the wind. He could not see me because I was lying under a net in a field of ferns. Emitting an impressive sense of power, he was dressed in his beautiful red spring coat. I was captivated by his majestic presence and his haughty attitude.

However, his velvet antlers gave him a quiet, serene, almost tender appearance. It was far too close for me to take pictures. I waited. He grazed in front of me for almost one hour before lying in the clearing in front of me.

It was a wonderful meeting. The sun irradiated his body which was animated by small shivers to prevent insects from resting on him. It was an unreal spectacle that only the animal world can offer to those who show patience.

For this artistic wildlife collection of fine art prints, I have chosen black and white. It allows me to highlight the details of the red deer coats, the textures, and the beauty of their slender form.

I hope that this collection of fine art prints will help you experience the same emotions that I do when I find myself near a red deer in the wild. 924
Red Deer Stag in Velvet Antlers XIII
How To Order.
Finish Choices.
Display Available Sizes.
Click Here to Receive Information About This Fine Art Print.
This page has been read 319 times
If this page interested you, would you give it a note? (5 stars is the best one)?
(6 votes)
Written by Amar Guillen
Click Here to Discover My New Collections.