Our art photographs are processed using specialized software and a computer. For us, this is an essential step in our creative process. The development of a photo (processing) strengthens our artistic approach and our photographic vision. 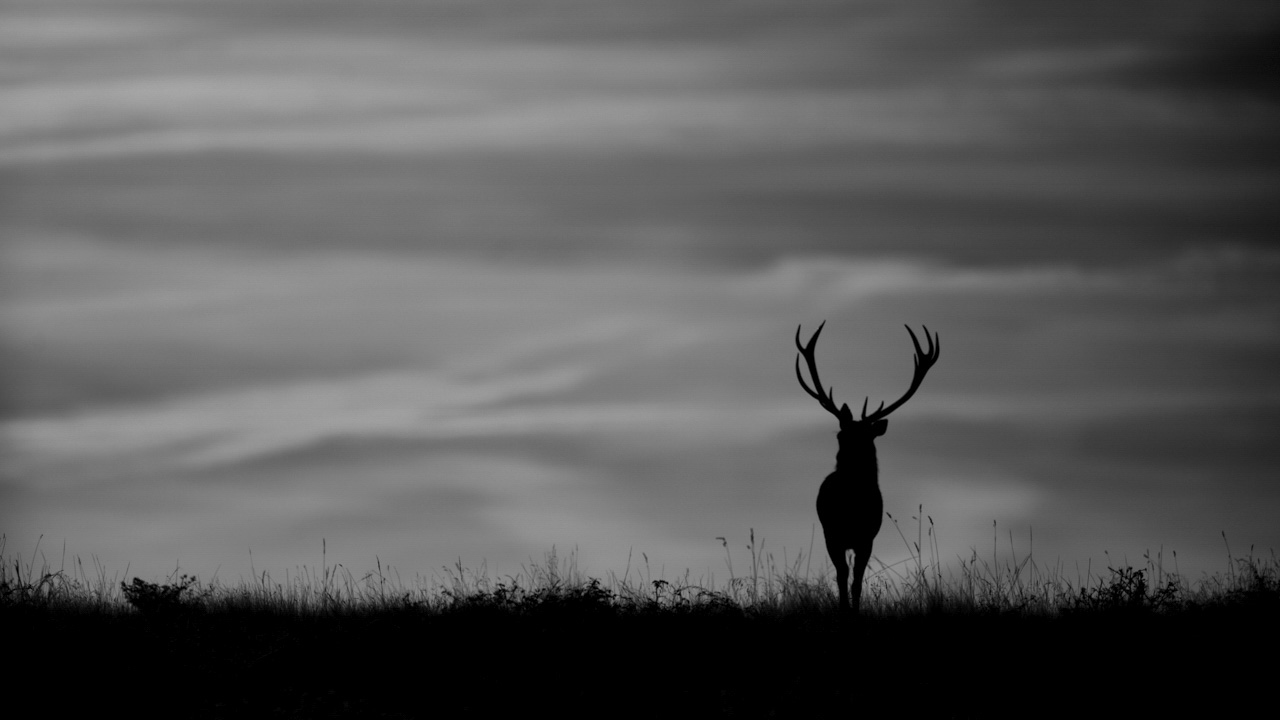 This black and white photograph of a deer has been developed to provoke questioning.

A Camera Does Not See Like the Human Eye

A camera is a machine designed by humans. It does not think like us. It merely completes the task given by the photographer. The way it records photos in memory is always the same, whether for landscapes, animals, or portraits. Nevertheless, every element of a scene is different. A camera does not distinguish between clouds, the fur of a mammal, or the scales of a fish.

How can one compare the texture of clouds with the Grand Canyon's rock structure? It is not possible. A camera is not able to distinguish differences in the photographic elements. To the camera, all details are similar due to the internal computer processing of the device, which is identical for the entire photo.

The human eye can spot these subtle nuances. The brain will build the final image that will convey the emotions of the scene or plan.

To overcome the weaknesses of digital cameras, a photographer will have to use external tools to paint his emotion into the scene. The only means at his disposal are computers and software. But before going further, it seems important to clarify a crucial point.

We agree that shooting is important in the creation of an artistic photograph. If several photographers are portraying the same scene, it is certain that all the photographs taken will be different because of the choice of the points of view, the framing, and the compositions. But if these same photographers decide upon the same setting for the placement of the camera, all photographs will be similar. The choice of cameras will influence the images created. Indeed, some of them have a better sharpness than others. Some are also more precise in the focus. But overall, the images will be similar.

How then to ensure that each photographer can confirm his photographic signature? The answer is simple. The photographic development makes it possible to affirm its difference.

Post Processing is the Key to Affirming a Photographic Signature

The shooting is the first step in expressing an artistic approach for a photographer. Computer post-processing is the second step that strengthens it. The advantage of development is that if several photographers use the same software, the results will be totally different. They depend completely on the sensitivity of each situation.

Indeed, the techniques and methods of development are so many and varied that the creative palette is infinite.

The development of a photograph for an artistic purpose is merely to reinforce a photographer's emotional response to a scene.

The post processing information of a photo is a guarantee for the creator of artistic photographs to have a unique and very personal signature. The condition is not to reveal development methods.

Processing an Art Photo is not Fraud

Developing an art photograph is in no way an act of cheating if you follow certain ethical rules.

We must not forget that art is above all, a means of expression for an artist. He is displaying his vision of the world to his viewers.

The development of a photograph for an artistic purpose is just to reinforce a photographer's emotional response to a scene.

This is still one of the major differences with documentary photography. As we discussed in the blog post dedicated to the creation of art photography, the two types of photographs are very distinct. Documentary photography is factual, descriptive. It reports a scene and shows an event. Since it is intended to illustrate an article or to be published in a book, the photographer cannot develop it in an artistic way. He must report exactly what he has viewed. The development of a documentary photo is mainly to crop the image, improve its sharpness, and change its exposure and contrast. It cannot go further because it could distort reality, which would be the equivalent of cheating. Artistic photography also has its limits as we will see in a next paragraph, however, these are limits are defined in broader terms.

For many people, computer post processing is heresy. They consider it nonsense for a picture worthy of the name.

Our answer to such accusations is that, at the time of the shooting, a photographer makes a subjective choice by choosing whether or not to integrate photographic elements. This choice specializes the scene itself.

The framing of a photograph does not accurately reflect the scene. By pushing the reasoning a little further, a photographer is displaying his perception of what he is experiencing. In framing, he cheats.

For us, this is a rearguard debate that no longer needs to occur.

Click here to read the Part II of the article.

What Do You Think?

And you, what is your opinion on this chronicle? What do you think?

If you have an opinion on the subject, can you post a comment below indicating your thoughts?

Would You Share the Chronicle with Others Thru Your Social Networks?

By subscribing to my newsletter, you will receive news with a new chronicle once a month.

Why and How A Photographer Should Have a…

Why and How Photographing Yellowstone in Winter -…

"The Guardians of Time Passing" - Collection of…

"The Mirror of the Soul" – Collection of Fine Art…

"Parallel Universes in Colors" – Collection of…

Amar Guillen is an artist photographer specializing in underwater, wildlife, and landscape photography. In 1987, his photographic adventure began while he prepared for a degree in computer engineering. The visual beauty offered by the sumptuous surrounding landscapes and the wildlife held within began (and continues) to be his source of inspiration. This has led him to entirely devote himself to a professional photographic career, allowing him to share his contemplative and artistic interpretation of nature. For the last fifteen years, he has photographed both the animals and their terrestrial and underwater natural landscapes. His photographic scenes are animated by the infinite mysteries hidden in nature.

Through his photographic gaze of nature, he strives to highlight the importance of its conservation. Amar lives and exhibits between France and the United States, both of which supply wildlife, landscapes, and cultures, providing inspiration for his work. Amar has published several books including "Lights and Colors of the Charente-Maritime Coast", "Reflections of Haute-Saintonge", and "The Secrets of Underwater Photography ".

Tagged under
Previous page and next page in this category: « Why and How an Art Photograph Needs to be Processed - Part 2 Why and How Creating Fine Art (Artistic) Photographs – Part 3 »
Shubham Prasad
This comment was minimized by the moderator on the site

Nice article dude and many few photographers know the use of best processing after clicking their images. All the major facts are explained very nicely in your article. Must take a look at my website post too which covers the same facts about Best DSLR Cameras.

Shubham Prasad
There are no comments posted here yet