How Photographing Yellowstone in Winter

You are certainly familiar with Yellowstone National Park in the state of Wyoming in the United States. It is an extraordinary place for landscape or wildlife photography in any time of year. It is also the largest caldera in the world.

Every year, I go to Yellowstone to recharge my batteries because it is the perfect place. This year, I returned in the winter to create new photographs for my fine art print collections. 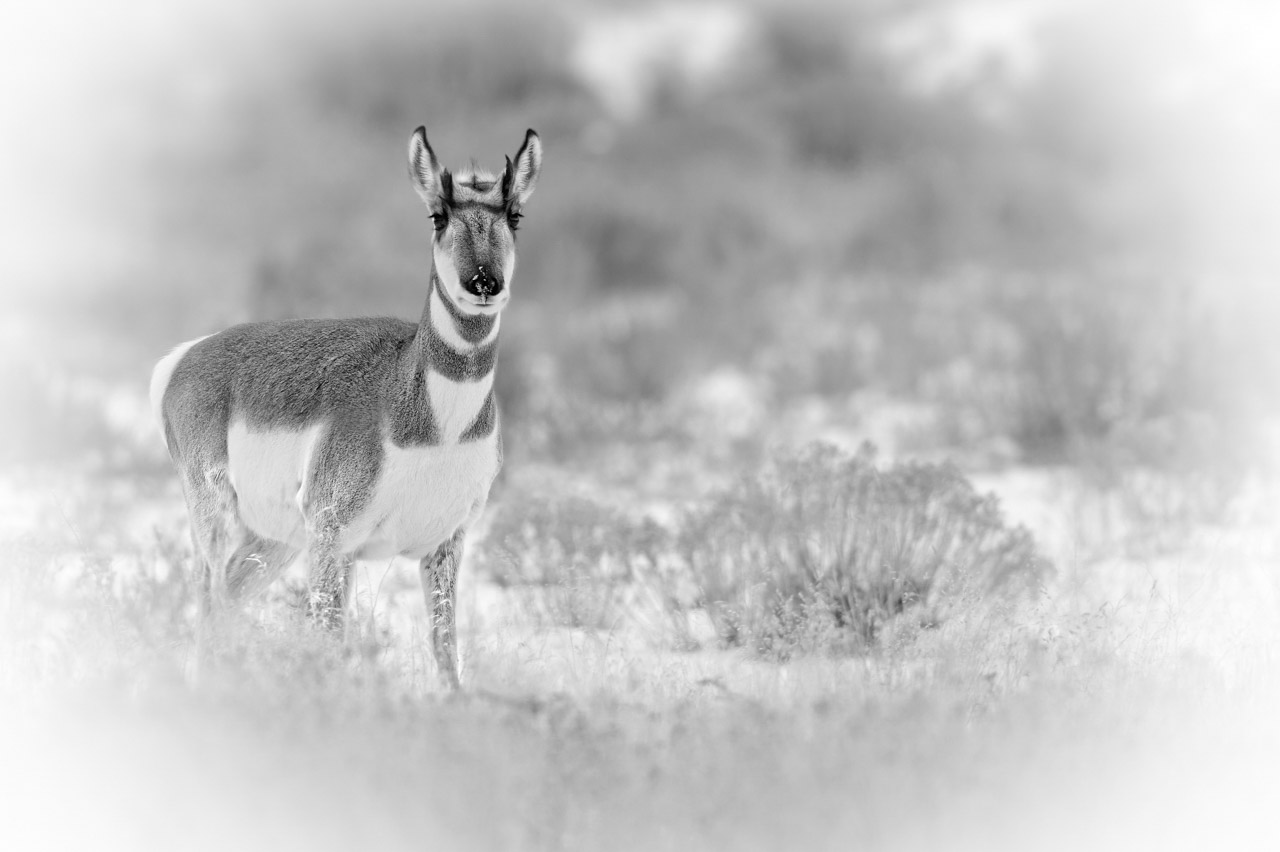 A pronghorn female in Yellowstone in winter.
Table of Contents

The Story of My Yellowstone Trip

Before I give you a reason to photograph Yellowstone in winter, I will tell you why I returned to the area for the 8th time.

At the opening of an exhibition dedicated to photographer David Yarrow in an art gallery in Dallas, Texas, I was totally enthralled by a photograph of a lion in action. This particular photo was taken from a low-angle view, which makes it stand out from others. Artistically speaking, this photograph is just perfect.

It gave me the idea of photographing an animal in the snow and from a low-angle view. Bison seemed to be the proper mammal because of its power and strength. In addition, it is a photo that I have never seen despite all my research. I thought it would definitely be a "masterpiece".

You can believe me when I write that it's a powerful animal because I've seen it loaded and it's just awesome.

However, the buffalo is an animal that lives in the plains to feed on grasses. It is not easy to photograph in low-angle view on the plains, whereas bighorn sheep that gravitate on steep slopes would be an easier choice.

During this winter trip, I traveled the Yellowstone using snowshoes to look for the most beautiful scenes to photograph. As always, a great photo needs luck.

On a beautiful sunny morning with a pleasant temperature of -10 degrees Celsius (14 degrees Fahrenheit), I took a path to seek out wolves to photograph. The day before, a pack had been spotted. After two hours of walking, I scanned the horizon with my binoculars until I saw a group of about a dozen bison walking on an overhang.

I told myself that this was my chance. Finally, after 4 days of not encountering the perfect opportunity, I would be able to capture the scene.

I travelled about 300 meters (900 feet) before realizing that the bison wanted to journey to an embankment to enter a meadow. I hurried to meet them. I had my 500mm in the bag, but it was too long a focal length to account for the mass of a bison. I decided to mount a 70-200mm. This lens allowed me to display the impressive volume of the animal. After all, the photo is a "masterpiece". The shot must be impressive in every sense of the word.

There was great risk though because the absolute rule is to always leave a minimum distance of 30 meters (90 feet) between a bison and you. If I stay more than 30 meters, I could have too much negative space. As beautiful as it is, that's not what I wanted to do.

Thus, I moved a little closer so that the framing and composition would be perfect.

The buffalo is an animal with a totally unpredictable temperament. It can charge without any sign of aggressiveness beforehand. Its startup speed is blazing. When a bison charges you, it is impossible to avoid it. Because of its horns, it is capable of projecting the weight of several humans bearing down upon an object, without any rebound force. I have seen videos and it is an impressive feat.

I approached the embankment, although the bison were not yet in sight. I lied down in the snow so that my low-angle view would capture the best possible range. I could not use a tripod because if I had to run, it would be clumsy to hold on to. I was 20 meters from the top of the slope.

Even though I was wearing protective clothing against snow and cold, it was quite uncomfortable. I protected myself behind a tree stump in case the bison decided to charge.

The seconds passed slowly. I did not know how long I had been waiting. My adrenaline rate was climbing, and despite the cold, I had terrible hot flashes that spread across my face. It was as if I felt the importance of the ensuing moment.

I realized that I had not planned out the scene. The bison would want to venture down the slope, and I would be in the way. I was about to get up to change places when I spotted the head of a young male. It was too late. I made some photos in burst mode. The sound of the camera surprised the buffalo, and he stopped in his tracks, unsure of what to do.

I decided to move, revealing my presence. He stared me down, and I knew I had to take photos, despite a small inner voice telling me that I should vacate the situation instantly. There was no need to force luck.

Of course, I forgot that I was wearing snowshoes. I wanted to turn around, but it was nearly impossible with all of my accessories. I fell in the snow and lost my camera. There I was, stuck with a bison staring at me, my camera stuck in the snow, and my ankles twisted in my snowshoes.

I gazed up at the buffalo, which continued to curiously stare. It did not show animosity, but I knew that this did not prevent an attack. I started talking to him in a loud but confident voice. I know that talking to bison means nothing, but what else could I do to tell him not to come down? Finally, I turned my legs and used my sticks to straighten up, which was not easy in a meter of snow (3 feet).

Here I am again, standing. I found my camera covered with snow and I walked back to the road. The head bison still had not moved. He continued to look at me with great curiosity. My heart beated wildly as I tucked my camera in my bag and hurried to move onto the path. I had never walked so fast with snowshoes.

Finally, after fifty meters (150 feet) of a frantic march, I turned around and noticed that the buffalo had begun to descend the hill with an unsteady step. The other members of the group followed him.

I resumed my walk telling myself again that no photo is worth risking my life to achieve it. Nevertheless, each time the situation arouses, it is only wishful thinking. This time, the lesson is likely to be remembered.

“And what about the photo?” you may ask. Well, it is exactly how I wanted it. It is a "masterpiece".

How photographing and succeeding your photos with snow.

Wildlife Photography in Yellowstone in Winter

In winter, you can photograph many mammals and many birds in Yellowstone.

The most common mammal is undoubtedly the bison. It is an animal that can weigh a ton. He may seem passive and embarrassed by the thickness of snow in which he walks. But do not be fooled. We had the opportunity to see bison running in the snow and they are very fast. To photograph them, you have to be very careful and remain a good distance away.

Bison are interesting animals to photograph because their coat contrasts greatly with the white snow. In addition, their eyes are very expressive, and their attitudes are often evocative. It is an animal that exudes power.

The poultry fauna is also included. The most remarkable bird is the bald eagle. Often, eagles are hooked to a branch over a river to fish. There are many species of swans, ducks, and passerines.

Although I love water birds, Yellowstone is my personal favorite because of its paradise of mammals.

I have adopted a particular technique for photographing animals in winter: the blind. I have noticed over the years that mammals move a lot in search of their food. I move with a cloth photo blind that is white as snow. I settle on the edge of a wood, and I can easily photograph coyotes, bighorn sheep and pronghorns without disturbing them. It is a practical technique because it allows me to be invisible. I am using this technique only if there is no wind otherwise it is impossible to stay more than 10 minutes due to the cold. A Special Atmosphere Created by Snow and Cold Temperatures

If this page interested you, would you give it a note? (5 stars is the best one)?
(11 votes)
Previous Article: How Creating and Succeeding Fine Art Photos with Snow Next Article: Photographing the Atmosphere of Yellowstone in Winter
I Want to Help You to Create Interesting Photos