Why and How Photographing Geladas from an Artistic Perspective

Gelada is an extraordinary primate to photograph. I devoted an article to this animal after my first trip to Ethiopia. Since then, I have made three trips, the third being quite recent. One of my three goals was to create artistic photographs of gelada. I spent five days photographing them at an altitude of over 3500 meters (11,500 feet). 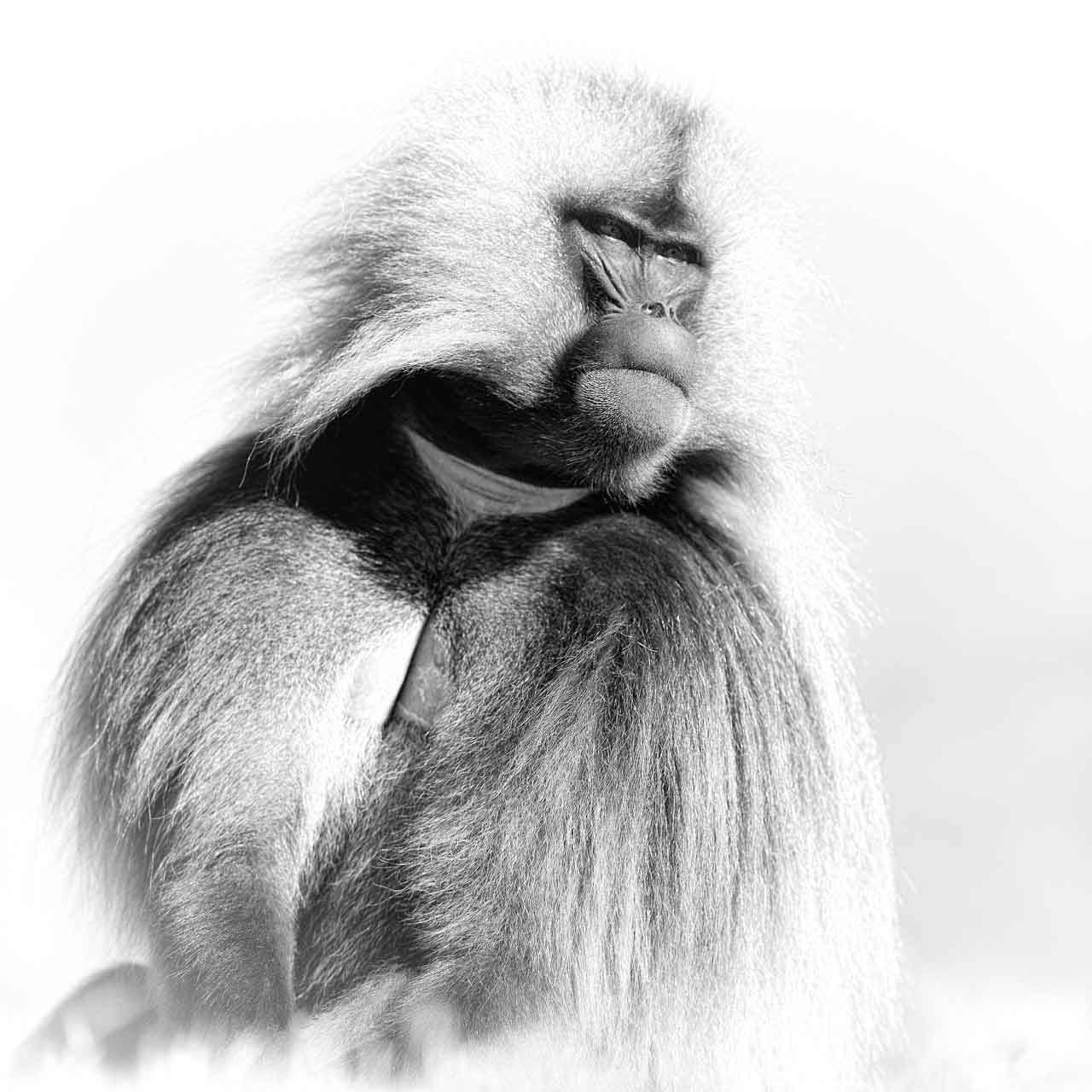 Artistic Photograph of a Male Gelada in the Highlands of Ethiopia.
Sommaire de l'article

Gelada primates are an endangered species. Today, these creatures are only visible in the highlands of Ethiopia. Originating millions of years ago, this herbivore feeds in green meadows. Unfortunately, the growth of man-made land, even in the Simien National Park, is causing the disappearance of the natural habitat of the gelada. In addition, soils are eroding rapidly. Food sources are shrinking.

Numerous scientific studies are being conducted to better understand the lifestyle of the gelada, for example, within the community conservation area of ​​Menz-Guassa.

During my trip to the Simien Mountains, I also met American scientists who spend many months counting and observing the Gelada’s behavior.

While the exact number of geladas is still difficult to estimate, some say the population is around 50,000. Others may disagree. But one thing is certain and unanimous in the scientific community: the population is decreasing.

Today, most researchers say the species is on the brink of extinction.

As I wrote in this article, the gelada is a very anthropomorphic monkey. It is easy to identify behaviors that possess human characteristics.

The monkeys often communicate with each other. When I spend several hours a day on site, I hear a multitude of sounds emitted by animals that move nonchalantly in the meadows. Many reactions follow these sounds. These sounds are intended not only for adults but also for children. It is an amazing sight to see a female chase after her baby.

The gelada is also called the lion monkey because males have a large mane surrounding the upper part of their body. This mane is a wonderful pretext for making backlit photographs. The effects of this iridescence highlights body development and emphasizes the power of the monkeys.

Females do not have manes, but they have an advantage over males. Their eyes are very expressive and full of emotion. They are perfect for making beautiful portraits.

For this new animal series dedicated to gelada, I decided to create portraits only in black and white. Black and white is perfect for highlighting textures and details of monkey fur.

Black and white also arouses that touch of timelessness that I strive to promote in my artistic photographs.

As a result of my large mammal project in Kenya, I created a collection of close-up portraits. Usually, my style in animal photography is characterized by wildlife environmental photography. I normally choose my scenery to highlight the animals I photograph. Usually, animals occupy a small place in my compositions.

This time, I focused on the attitudes and expressions of the geladas. My goal was to show off the monkeys’ forms. I did not want to focus on the scenery in the sets. The gelada needed to be at the heart of each photograph, so that I might create strong photographs without any deceptive settings.

For this series, only the light and the geladas were used to create these artistic photographs.

I used the backlight, the iridescent technique, and the 90-degree lights.

I wanted to highlight the looks, the attitudes, and the bodily expressions.

My greatest reward for the creation of this series was experiencing the meeting of a female and her baby. Initially, she was very suspicious. She did not let the kid approach too close even though he was curious to see what I was doing. Like all children, strange things are objects of lust. I ventured a few meters from the group, and after two hours of patience, the mother approached me. She let the kid have a little fun with me. This was a moment of extraordinary sharing, further emphasizing the fascinating wonder of the animal world.

Some Photographs of Gelada Monkeys in Black and White Click Here To See Black and White Fine Art Print Collections.
If this page interested you, would you give it a note? (5 stars is the best one)?
(39 votes)
Previous Article: 5 Steps to Master the Photographic Writing Next Article: Why and How You Must Stepping Out of Your Photographic Comfort Zone to Create Interesting Photos
I Want to Help You to Create Interesting Photos