In August 2017, we went to Caddo Lake, which borders Texas and Louisiana. Although we were originally completing a customer's request for several regional artistic shots, the project allowed us to create a new collection of six art photographs devoted to the only natural lake in Texas: Caddo Lake.

A Large Natural Wetland in the Wilderness

Caddo Lake is the only natural lake in Texas. Its surface area is 25,400 acres (10,300 ha). It is a wet region blanketed in dense cypresses. Caddo Lake was used by Native Americans for thousands of years, but substantial commercial development only began with the invention of the steamboat and the American annexation of Louisiana and Texas by treaty in the 19th century. Texas is the only state in the United States to have joined by the treaty instead of annexation.

The cities of Port Caddo, Swanson's Landing, and Jefferson, Texas; and Mooringsport, Louisiana, were known for their flourishing river ports on Caddo Lake. Gradually, Captain Henry Miller Shreve and the Army Engineers Corps removed the ice jams between Red River and Caddo Lake. The shape of the lake then changed; its level dropped by 10 feet (3 meters).

The only way to photograph the wetland landscapes of Caddo Lake, Texas, is to experience Caddo Lake State Park. With canoes, it is possible to sail through a vast labyrinth of bayous and swamps. The average depth of the lake is 8 to 10 feet (2.4-3.0 m). Although the lake contains 71 species of fish, it is particularly renowned for fishing largemouth bass and white bass. Naturalists can admire cypresses, water lilies, waterfowl, alligators, turtles, frogs, snakes, raccoons, mink, beavers, squirrels, armadillos and white-tailed deer.

A Paradise for Wetland Photography

Even though the lake is a state park, the properties bordering the lake are private. It is impossible to take pictures anywhere else except for a few hidden locations. From a canoe or motorboat that can be rented with a guide, it is possible to carry out photos of exceptional landscapes.

When arriving at Caddo Lake for the first time, the biggest surprise is the discovery of the vast cypresses growing in the middle of the water. They are enclosed in thick Spanish moss, giving viewers a glimpse of an unending world of haunted foliage.

Making interesting photographs is difficult because there is a limited choice in points of view. We use focal lengths greater than 100mm to create tight distant shots. For this project, our work focused on managing the reflections of trees in water and the shape of trees. We wanted to show their majesty and their ability to resist time by pushing into a difficult area.

For this project, we chose black and white because it was perfectly suited to the shape, structure, and texture of trees. We wanted to show and describe this unreal atmosphere specific to Bayou.

These interesting photos will be added to our collections of art photographs, in the theme "shades of blacks and whites". 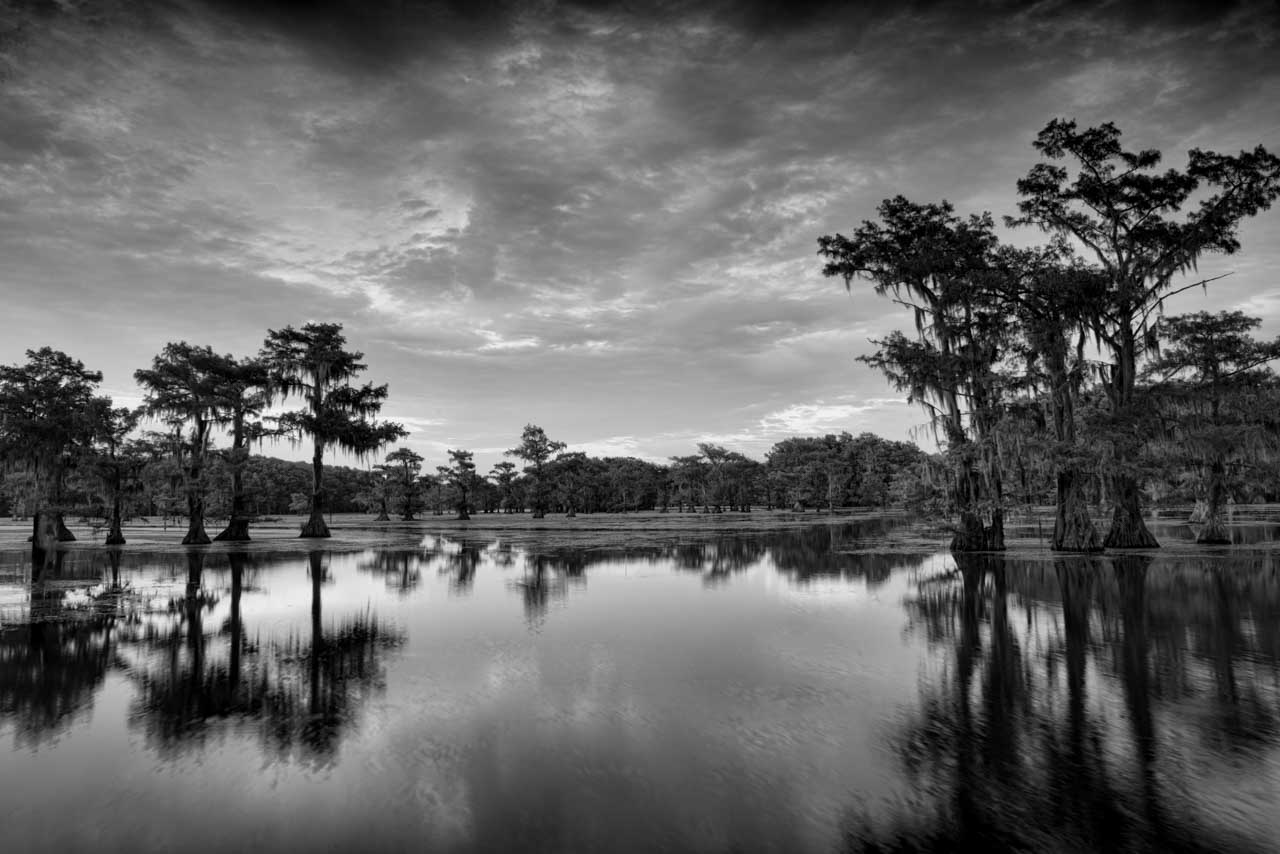 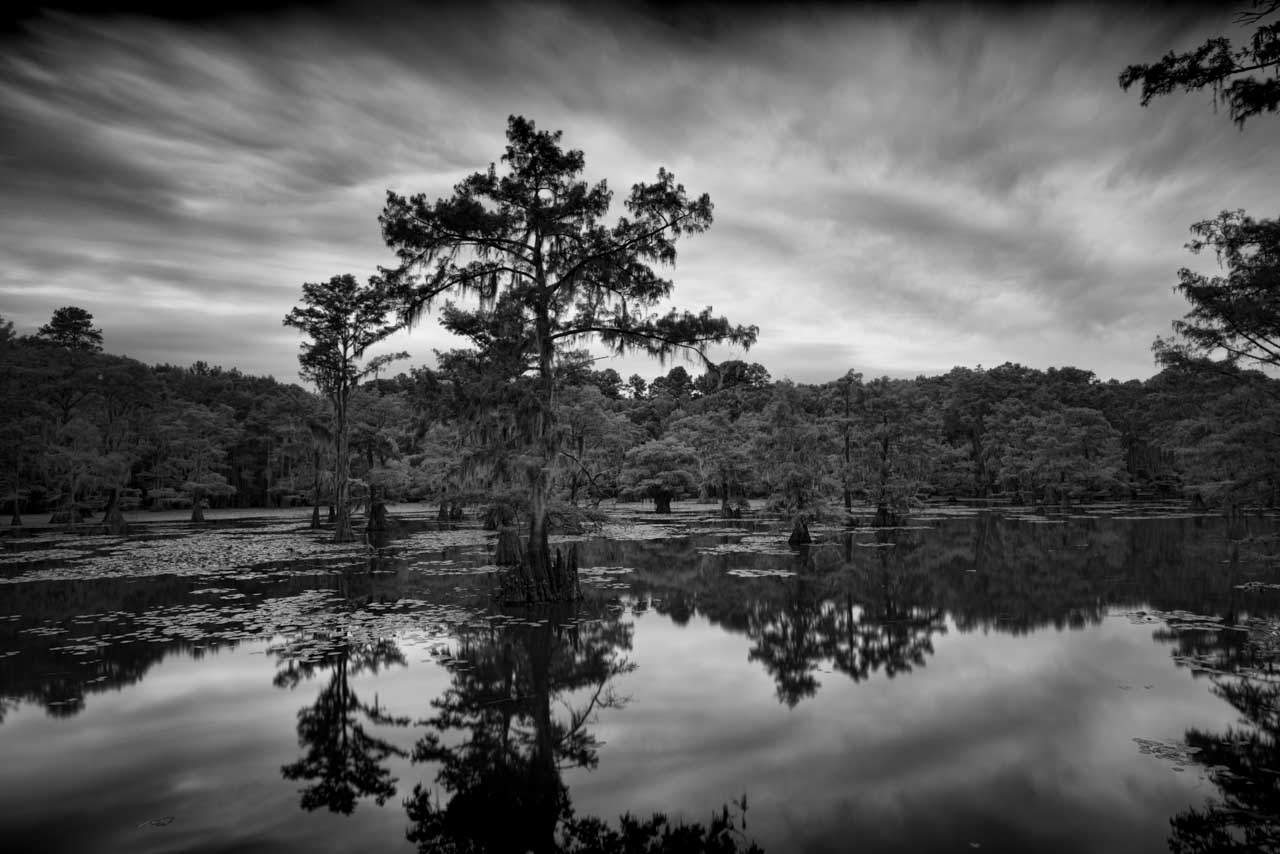 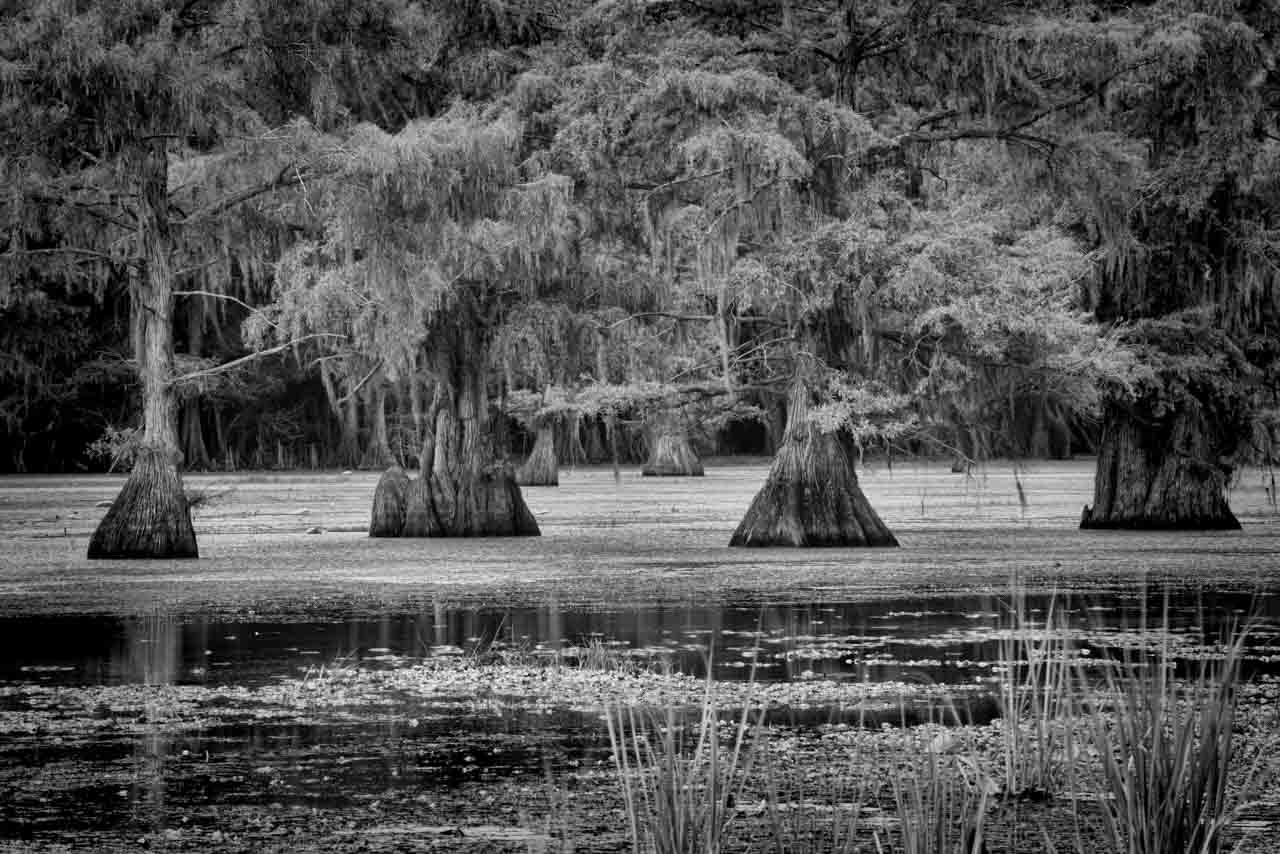 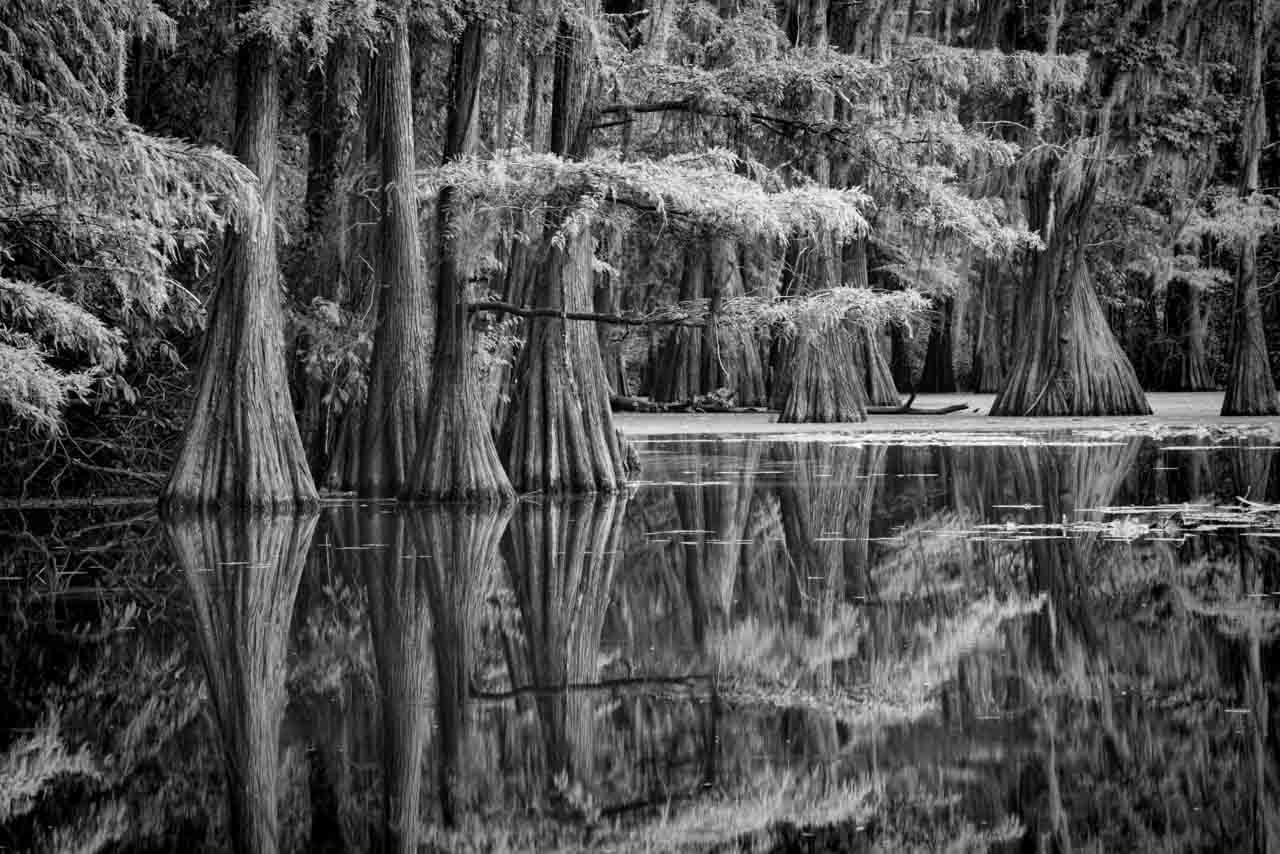 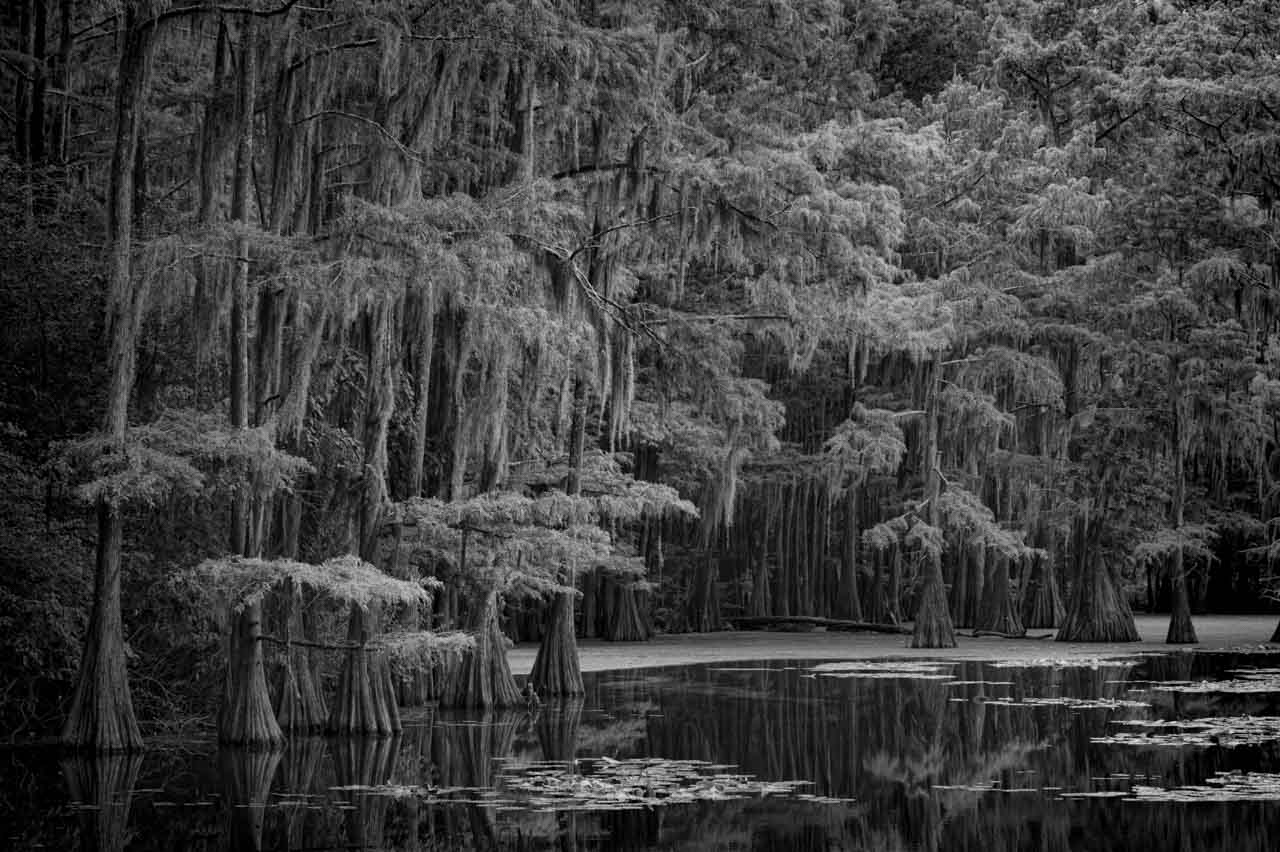 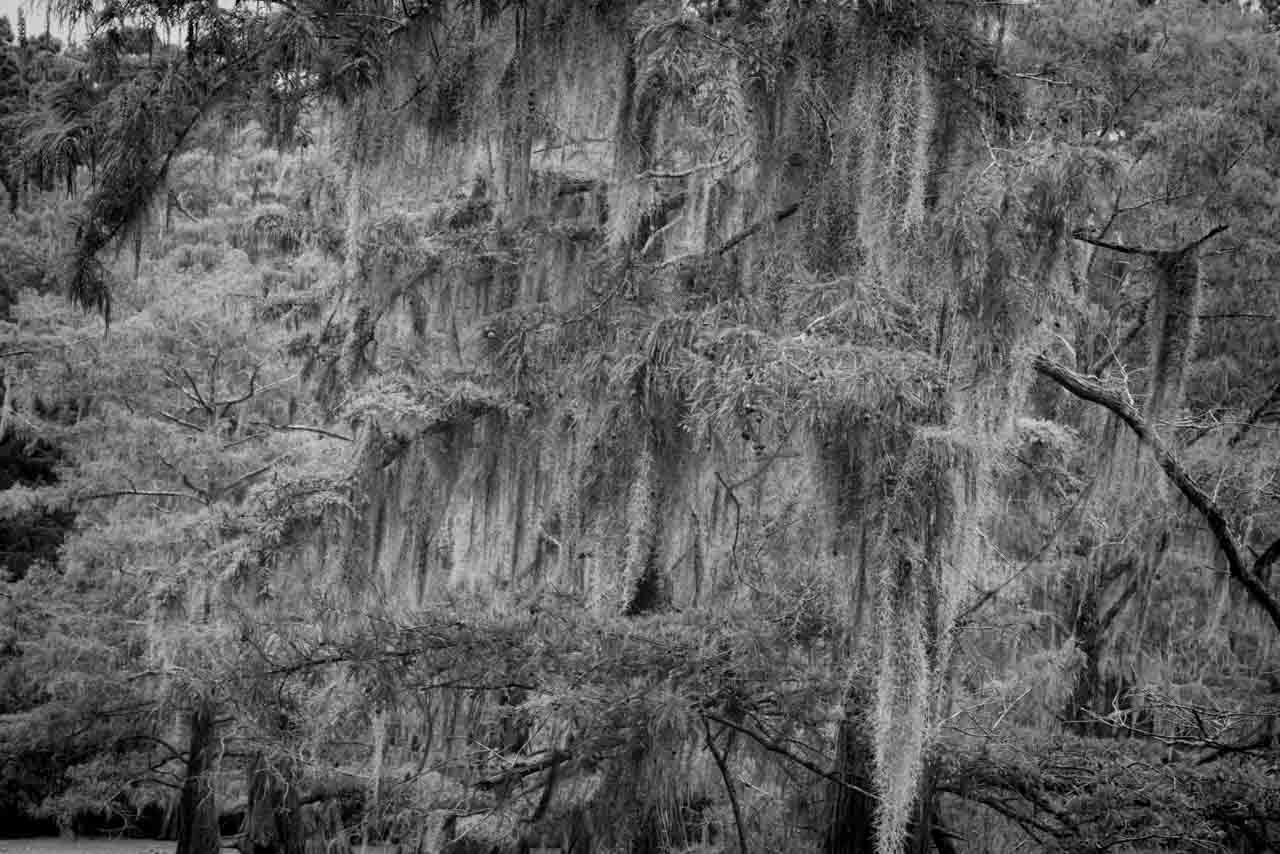 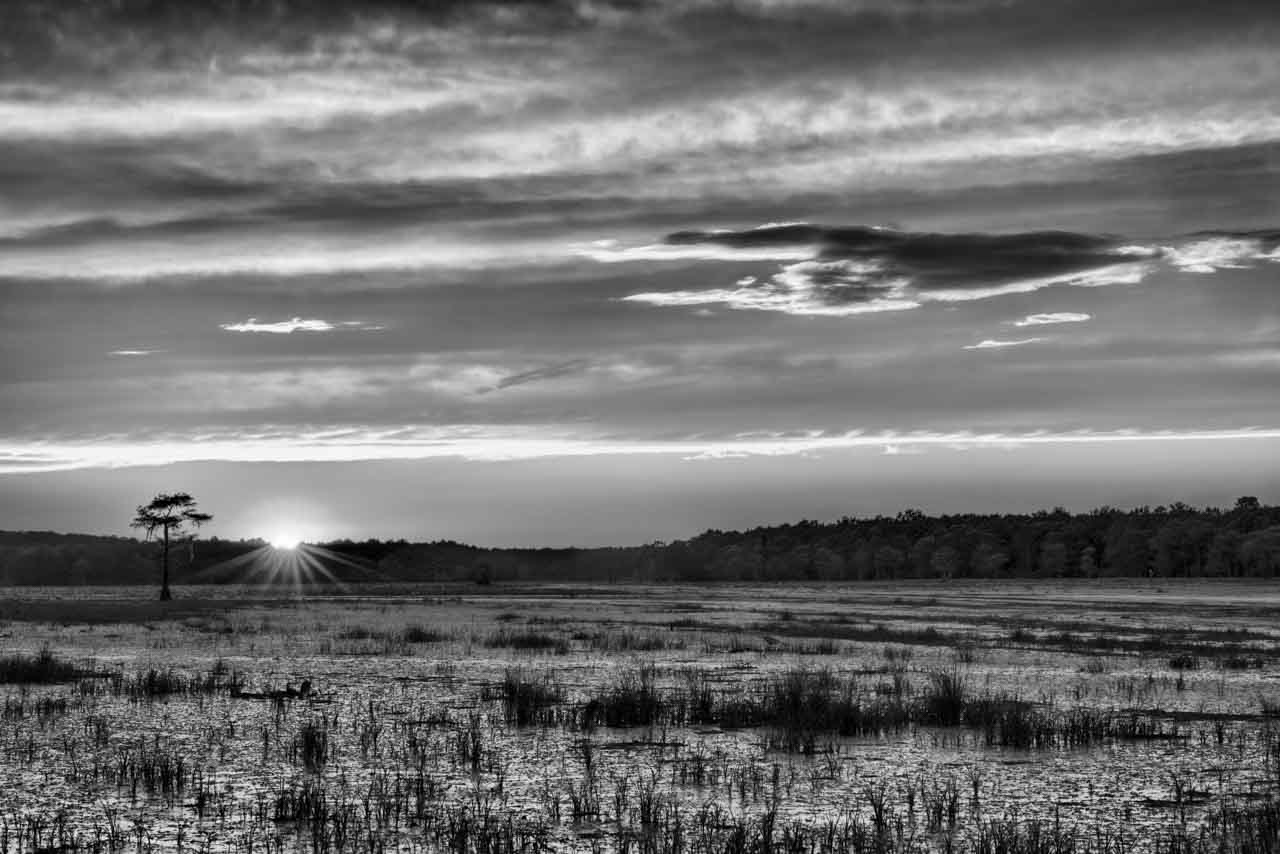 May 2013. Our book "Reflections of Haute-Saintonge" is published

August 2018. Landscape Photo Project in the Canyonlands in Utah

1007
August 2018. Landscape Photo Project in the Canyonlands in Utah