Why and How: Photographing the Dragon’s Tongue of the Black Canyon in Colorado

If you are a photographer with a passion for strange phenomena and landscape photography, then photographing the Dragon’s Tongue of the Black Canyon of Gunnison National Park will be a real challenge for you.

The Dragon’s Tongue is a phenomenon that combines a form of landscape, a particular light, and a point of view.

In this article, I share with you my first experience with the Dragon's Tongue in the Black Canyon of Gunnison National Park in Colorado. This memory will remain forever etched in my mind. 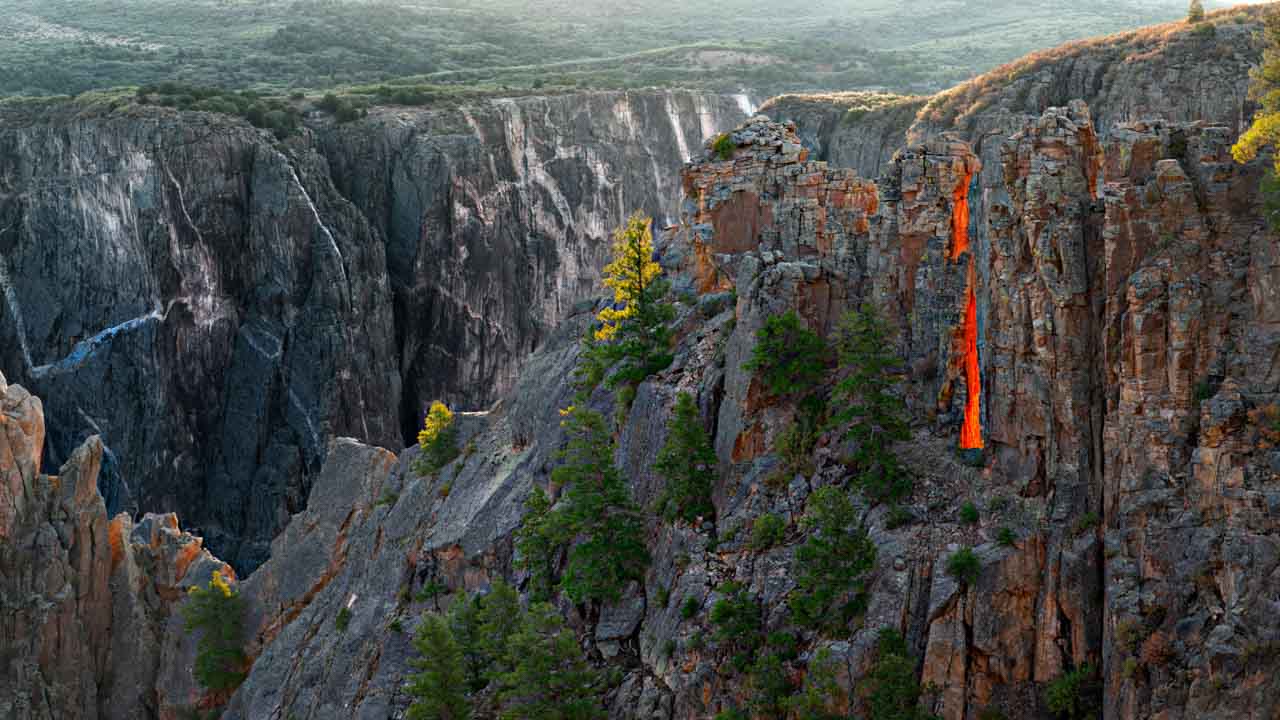 The glowing red dragon's tongue of the Black Canyon in the state of Colorado in the United States.
Table of Contents

The Short Story of This Article

Since I have been arrived in the United States in 2001, I have been passionately following in the footsteps of Ansel Adams who imparted a deeper meaning to the landscapes of the southwestern United States.

Each year I complete at least two landscape photography projects in the United States to create collections of fine art photography. My goal is to share my passion for these wonders of nature. It was in 2013 that I first heard about the Dragon’s Tongue phenomenon.

It is a particular play of light that illuminates a rock face. The orange and red colors are so intense that they can be compared to a dragon's tongue.

The first time that I witnessed this occurring was in the Canyonlands region in Utah. A photographer showed me some pictures he had taken. I was amazed at the beauty of the phenomenon. However, I understood that he was not actually willing to give me the GPS coordinates of where he had taken the picture.

During the years that followed, I tried in vain to photograph this natural phenomenon.

It was only in August 2020, after seven years of waiting, while I was working on a photo project in the Black Canyon in Colorado, that I was finally able to realize my dream.

A local photographer, Vince Farnsworth, gave me the exact location to photograph a Dragon’s Tongue. It was not easy. It took me four mornings to photograph the phenomenon.

In the rest of the article, I explain how it happens and what the necessary conditions are.

Why and How: Photographing Canyon de Chelly in Arizona.

The Phenomenon of the Dragon's Tongue

I am going to explain this phenomenon of the Dragon's Tongue from the Black Canyon because I believe that it is the best. I hope to have the opportunity to verify if the theory is also valid elsewhere.

The Dragon’s Tongue appears during the spring and summer months. Maximum intensity is reached in April and August.

First of all, you must be in a particular position relative to the sun. The sun has to rise at 75° east from the north.

It is necessary to arrive early in the morning to be in the right place, as it is a morning phenomenon.

The photographer explained to me that it was possible to see it at other times of the year, but the intensity of color and contrast was much less at other times.

On the other hand, the sky must be clear to have the maximum effect of the light.

Another factor is that the sun must shine. It must begin to rise in the sky unobstructed by clouds.

Finally, you need to place your tripod perfectly to achieve the maximum effect.

I would even say that photographing a Dragon’s Tongue correctly is a real challenge.

On the first morning, the cloud layer was too thick for the light to penetrate. I waited three hours, but by the time the sun appeared, it was too late.

On the second morning, the sun was nearly clear except for a cloud that prevented me from taking my pictures.

On the third morning the sky was clear. The sun was rising brightly. Unfortunately, I was not in the right place. I was 330 feet (100 meters) too far to the left. By the time I was able to transport all my equipment to the right place, the sun was too high in the sky. But at least I knew where to be for the next morning.

On the fourth morning, I had a few minutes before sunrise. The temperature was 33 degrees Fahrenheit (1 degree Celsius). The sky was clear. I was witnessing the phenomenon. It was a fabulous and intense moment. It was as if a cascade of glowing red light poured down the cliff in front of me. I was extremely excited and incredibly happy to finally be able to capture this magical moment.

I captured at least 30 photos. I kept two of them that I think are the most beautiful. 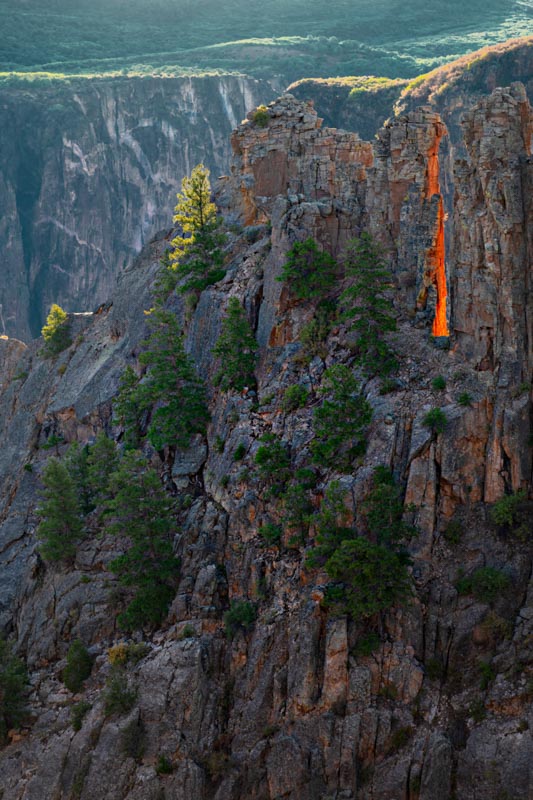 The glowing red dragon's tongue of the Black Canyon in the state of Colorado in the United States.

Why You Should Photograph a Dragon's Tongue

You have certainly understood that a Dragon’s Tongue is a natural phenomenon resulting from the reflection of light through a rock face.

This scene may seem obvious to photograph. But believe me, it is a real challenge. The conditions to be met are so particular and difficult. As I said before, you must be patient to reap the rewards.

But the challenge itself is worth the effort, and this is the ultimate reason for why you should choose to photograph a Dragon’s Tongue.

For a second reason, I would say that this is a unique moment to create different and impactful photos. It is not always easy to find new scenes to photograph. With this phenomenon it is an opportunity to surprise an audience that is seeking something new.

For a third reason, I would add that the symbolism behind such a scene is extraordinarily strong. Your audience may interpret it in many different ways, sparking contemplation and discussion.

Personally, I find that a Dragon’s Tongue looks like a cascade of light that is a source of life. It reminds me of a source where we can drink to regain new energy and move forward with a refreshed vigor. However, this symbolic interpretation can also be quite personal.

Why and How: Photographing Valley of the Gods in Utah.

How to Photograph a Dragon's Tongue

As I said before, photographing a Dragon’s Tongue is a real challenge because you have to find the perfect location.

It is also technically difficult because the sun has to face you. The reflections are numerous. Personally, I use a small reflector that I hold over the lens with my hand to avoid reflections.

All focal lengths are possible. It all depends on how far away you are from the scene.

If you prefer a short focal length such as 20 mm, you will integrate the dragon tongue in a very wide landscape. You will then be able to better locate the phenomenon.

If you choose a focal length such as 130 mm, you will make a closer shot to better describe the phenomenon and make it more explainable.

I like to photograph f/16 landscapes because I find that the depth of field is important. Moreover, I find that the rendering of details is excellent. To specifically photograph the Dragon’s Tongue of the Black Canyon, you may want to use the f/16 aperture so that your shutter speeds will be about a quarter of a second at ISO 100. You will understand better why a tripod and a remote shutter release are necessary.

Another problem may arise that you will have no control over, which is the wind. The point of view is located on a height that is exposed to all wind directions. You will have to be careful because the wind can cause vibrations that will blur your photos.

Your tripod will need to be well insured to remain fixed in its exact location.

In summary, I recommend that you have a camera, several lenses, and a remote trigger. All that is left is to find the right point of view. Be patient when taking your pictures.

I hope this article will make you want to venture out and photograph the Dragon’s Tongue of the Black Canyon of the Gunnison National Park in the state of Colorado in the United States.

This scene will be the opportunity of a lifetime. You will be able to create an extraordinary photo that will have a lot of impact.

Do not get me wrong, the process is quite difficult. You must not be discouraged but keep the idea of the reward in your mind. It will come.

There are many places in the world with the Dragon’s Tongue. The main problem comes from the fact that you have to know where to place it to immortalize its image forever. Perhaps this could be a new challenge for you? I hope that you enjoy seeking out these special locations during your future adventures.

Fine Art Collections In 1 Click.
If this page interested you, would you give it a note? (5 stars is the best one)?
(4 votes)
Previous Article: Photographing the Landscapes of Island in the Sky in the Canyonlands of Utah Next Article: Low Key Photography: A Creative Photographic Technique to Make Your Photos Unique